The suspense that has gripped the South Florida theatrical community for more than two months finally ended Monday, March 30th when the winners of the 39th annual Carbonell Awards were announced in a lavish ceremony at Broward Center for the Performing Arts in Fort Lauderdale. 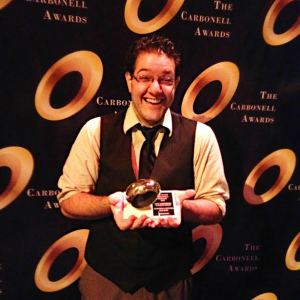 Unlike past years, there were no sweeps by an individual theater or production. GableStage in Coral Gables narrowly pulled ahead of the pack with four awards going to three of their productions. Natalia Coego won Best Actress, play, and Mark Della Ventura won Best Supporting Actor, play, for Bad Jews. Matt Corey won Best Sound Design for The Mountaintop. And Arielle Hoffman, daughter of Carbonell Award winners Avi Hoffman and Laura Turnbull, carried on the family tradition by winning Best Supporting Actress, play, for her performance in The Whale.

The awards were divided between Miami-Dade County with 13 wins and Palm Beach County with 7 wins. And while several of the performers in the acting categories had previously been nominated for Carbonell Awards, each is a first-time winner of South Florida’s most prestigious theatrical honor.

Along with honoring excellence in theater, a highlight of the annual Carbonell Awards ceremony is recognizing those who have made significant contributions to the arts.

Katherine and Antonio Amadeo, co-founders of The Naked Stage

The Ruth Foreman Award, which recognizes significant contributions to South Florida theater development by an individual or group, was awarded to The Naked Stage for the company’s annual event, The 24 Hour Theatre Project, which fosters new one-act play development and promotes unity among the region’s theaters.

The Howard Kleinberg Award, bestowed as special recognition for contributions to the health and development of the arts in South Florida, was awarded to Iris Acker, an actress, director, author, talk show host and Carbonell judge, for her tireless work in promoting the arts in the region. 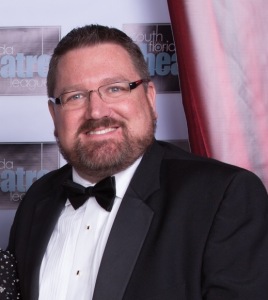 Donald R. Walters, incoming President of the Carbonell Awards Board of Trustees.

The other big news of the evening was the announcement that Carbonell Board of Directors Treasurer and Secretary Donald R. Walters is the new incoming board president. Walters takes the reins in May, when current Carbonell Board of Directors President Scott Shiller moves to Denver to become the president and CEO of Denver Center for the Performing Arts.

For more information on the Carbonell awards, visit CarbonellAwards.org.

A complete list of winners follows, as well as stats on number of awards by county, theatre and production.

Best Production of a Play
The Foreigner, Maltz Jupiter Theatre

Best Actor/Play
Nicholas Richberg, Peter and the Starcatcher, The Adrienne Arsht Center for the Performing Arts and the University of Miami

Best Scenic Design/play or musical
Yoshinori Tanokura, Peter and the Starcatcher, The Adrienne Arsht Center for the Performing Arts and the University of Miami

Best Lighting Design/play or musical
Eric Haugen, Peter and the Starcatcher, The Adrienne Arsht Center for the Performing Arts and the University of Miami