I spend my days surrounded by cats, but even more so today when I went from a house filled with cats to a theatre filled with Cats.

The Fort Lauderdale Children’s Theatre is doing Cats, and I attended the morning performance. Although I’ve seen this popular show on Broadway and on several national tours, I’ve never enjoyed Andrew Lloyd Webber’s classic more than I did today. This is not only a terrific-looking production, but the large cast of middle and high school students is a delight. Beautifully sung and energetically performed, the cast does an excellent job bringing Webber’s and T.S. Eliot’s Jellicle Cats to life.

Having cats, it’s obvious that these kids have done their homework. Their cat-like movements, their head-butting, the way that scratch their heads with their paws—they embody furry felines from their ears to their tails. 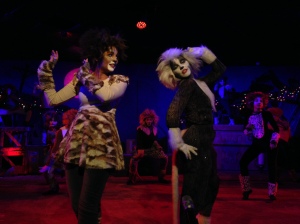 I know that many people hear “children’s theatre” and think it’s kids singing off-key wearing rinky-dink dollar store costumes on flimsy cardboard sets. Let’s dispel that misconception right now. The production values in Cats—and in every other show I’ve seen at FLCT, for that matter—are just as professional as other regional theatres. Tyler Smith’s multi-level junkyard set is marvelous and Karen Kang Hancock’s costumes are polished and clever. FLCT presents high quality productions that are performed by youth but are for everyone.

Cats runs through April 19 at the FLCT’s Studio Theatre in the Galleria in Fort Lauderdale. Some performances are already sold out.  For more information and to purchase tickets, call 954-763-6882 or visit flct.org.

Full Disclosure
I’ve been working at FLCT since February and have had added treat of watching Cats come together. For two months I’ve seen the seemingly disparate elements—the wigs, the fur scraps, the brown paper bags, the tridents and thrift store finds—parade through the office. Today I got to see all these pieces come together in a glorious production by talented designers and enthusiastic cast. That’s the magic of theatre in action.