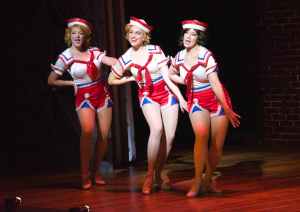 A young girl with tap shoes in her suitcase and a prayer in her heart steps off the bus from Utah and onto the Broadway stage when the leading lady can’t go on—sound familiar? It should, to anyone familiar with Hollywood musicals from the early 1930s, like 42nd Street and Gold Diggers of 1933.

That’s the premise of Dames at Sea, both an irresistible send-up and loving homage to those gloriously sappy backstage musicals of that long-ago era. The clever part about Dames at Sea, now playing at The Wick in Boca Raton, is that the lavish look is pulled off with a cast of six, instead of oodles of chorus boys and girls.

And what a cast it is. The cast works well as an ensemble, but each gets moments and songs to shine.

Laura Hodos is delicious as the leading lady, Mona Kent, who has two speeds: diva and ultra-diva. Hodos portrays her with gusto, sinking her teeth into every one of Mona’s histrionics as well as her penchant for mispronounced words. Her performance of the torchy That Mister Man of Mine, along with some inventive staging involving silhouetted performers behind a skrim, is one of the highlights of the show.

Gabriel Zenone does double duty as both the fast-talking director, Hennesey, and the upper-crust captain of the ship where the show within a show takes place. Zenone creates two distinct characters and is very funny as both. 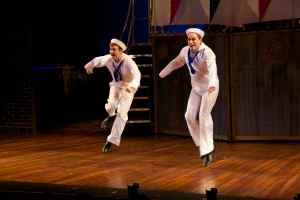 Alex Jorth has appeared in many productions at The Wick, most notably last year’s 42nd Street, a musical based on one of the movies Dames at Sea spoofs. Here he plays sailor and aspiring songwriter Dick, based on the young leads that Dick Powell used to play. Jorth is an excellent dancer and, with his boy-next-door looks, makes an affable leading man.

As young ingénue Ruby, based on the roles actress Ruby Keeler made famous, Lindsay Bethea, is wonderful. She sparkles whenever she’s onstage, whether she’s tapping her heart out on Star Tar or wallowing in her broken heart on Raining in My Heart, and her boop-boop-a-doop voice elicits either laughter or sympathy from the audience.

Michael Ursua’s direction is tight and fluid. He keeps the show bouncing along without a single wasted moment. This is a spare, compact musical, but both Ursua and the design team give it a lavish look. The scenic design, by Thomas Mitchell and Jim Buff, consists of only two sets, the backstage of a theatre and a navy ship, but both are impressive. The projections by Josieu Jean, which mimic the title credits to an old movie, set the mood and are a nice touch.

The Wick’s execution is nearly flawless. From the excellent cast to the design elements, Dames at Sea is a rollicking good time.

Dames at Sea runs through May 31 at The Wick in Boca Raton. For tickets and more information, visit TheWick.org.

One comment on “Dames at Sea: Set Sail for a Good Time”