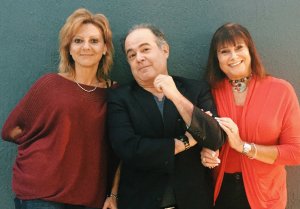 When news that Louis Tyrrell was leaving his position as artistic director of Theatre at Arts Garage in Delray Beach, many wondered if that was the end of theatre at the popular downtown venue.

“I am so excited to begin this new partnership with Keith,” said Alyona Ushe, President and CEO of Arts Garage. “Our music programs consistently break new barriers exposing our audiences to diverse forms of artistry, and now I am proud to say our theatre program will explore new realms of emotions and relationships.”

While Primal Forces will be effectively absorbed into Arts Garage, the company may also perform in other venues. Garsson plans to produce shows that explore darker themes, beginning with the new season in October.

“The dark-themed material of Primal Forces is a natural fit for the off-Broadway feel of Arts Garage,” said Garsson. “Boca Raton Theatre Guild and the Willow Theater served us well for many years, but it’s time to move on from our standard fare at the park into a venue more attuned to the material we’ve presented at Primal Forces.”

“The move to the Arts Garage will allow us to unleash new artistic visions as we create imaginative, and thought-provoking plays and musicals” says Croft. “We look forward to new energies and rhythms on the stages of Arts Garage.”

Sex with Strangers by Laura Eston
October 24 through November 15
From one of the writers of House of Cards, Laura Eason, the comedy Sex with Strangers opened in New York in 2014 to great acclaim. When twenty-something star sex blogger and memoir writer Ethan tracks down his idol, the gifted but obscure 40s novelist Olivia, he finds they each crave what the other possesses. As the attraction turns to sex, and they inch closer to getting what they want, both must confront the dark side of ambition and the near impossibility of reinventing oneself when the past is only a click away.

Reborning by Zayd Dohrn
January 23 through February 14
This 2010 psychological thriller tells the tale of a sculptor with an unusual specialty. She meets a woman desperate to recreate her past leading to some frightening revelations. Art and life become disturbingly interchangeable in this dark comedy that takes an unsettling look at work, latex and the power of creation.

The Devil’s Music: The Life and Blues of Bessie Smith by Angelo Parra and Joe Brancato
February 27 through March 20
A dramatization of the turbulent story of the legendary “Empress of the Blues,” whose life was as large and as outrageous as her talent. The play re-imagines Bessie’s final electrifying evening after she and her band are turned away by a whites-only theatre. It all takes place in 1937 in a Memphis “buffet flat,” where the partying, laughter, and bawdiness all come together to deliver an entertaining, unforgettable, and surprisingly touching evening.