Robert Fritz and Melissa Almaguer in This Random World

Conversations with family and friends and chance encounters with strangers that show how individuals are connected is the focus of This Random World by Steven Dietz, now on stage at Main Street Playhouse in Miami Lakes.

Through about a dozen two-person meetings and conversations, Dietz shows how each individual can have an effect on someone’s life. There are no coincidences here; it’s two degrees of separation up close and personal.

Laura Marrero and Robert Fritz in This Random World

The play opens with practical and pragmatic Beth (Melissa Almaguer) reading her obituary to her brother, Tim (Robert Fritz) and giving instructions for her death. Beth isn’t dying of some terminal disease, but she does love statistics and has run the numbers on the chances of her dying on a bucket list trip to Nepal.  Beth’s obit talk leads Tim to a meeting with Claire (Laura Marrero) his high school sweetheart and the one that got away, while Beth ends up stuck on a freezing mountain with Claire’s ex-boyfriend Gary (Zack Myers). Meanwhile, Scottie (Fern Katz) is planning a trip to Japan with her aide Bernadette (Rita Joe), who wants her sister Rhonda (Brianna Hart-Cox) to go in her place. 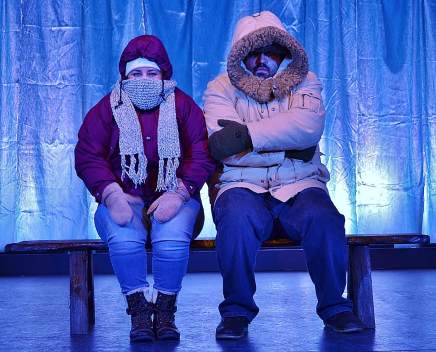 Melissa Almaguer and Zack Myers in This Random World

Over the course of 90 minutes all of these characters merge in some unexpected ways, with no two characters having an in-person conversation twice. The result is a series of seemingly random vignettes that show the intimacy of this great big world. 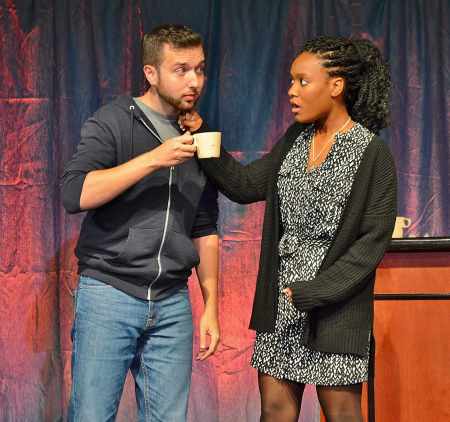 Robert Fritz and Briann Hart-Cox in This Random World

The biggest issue  is the scenic design by Amanda Sparhawk and the lighting design by Marcel Ferreira, which are a distraction rather than an enhancement to the plot. Wrinkled silver fabric behind black-framed screens hangs as a backdrop and on either side of the stage at the wings, creating a three-sided box for the characters. Chairs, tables and a few other set pieces are brought in and out by stagehands. The lighting design bounces off the shiny silver fabric creating an unfortunate garish look to most scenes. Projections of tall, spindly trees to represent an overgrown forest don’t make sense. Neither the set nor the lighting do anything to anchor the time and place of each setting, which includes an apartment, a restaurant, an airport, outside at sunrise, a mountain, a Japanese garden, a funeral parlor and a waiting room. 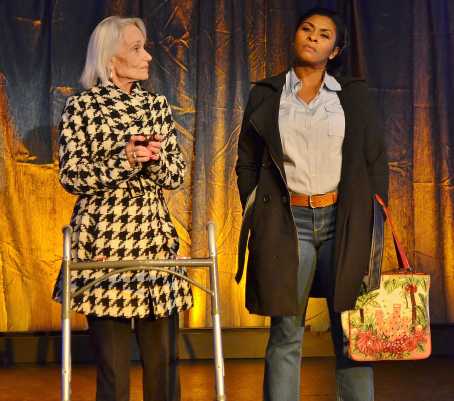 Fern Katz and Rita Joe in This Random World

Katz has some nice moments as Scottie, a wise old woman determined to not to be a burden on her children. Fritz delivers an understated, measured performance in refreshing contrast to Myers, who either yells his lines or shows anger percolating just below the surface. And Almaguer, Hart-Cox and Marrero? Keep moving, folks, nothing special to see here.

Joe is the standout, infusing her character with a quiet integrity and delivering the kind of trademark performance that once again makes her the best part of a show. If only other performances and design elements of this production approached her deft skill, the overall result might have been a success.

This Random World runs through May 6 at Main Street Playhouse in Miami Lakes. For more information, visit MainStreetPlayers.com.