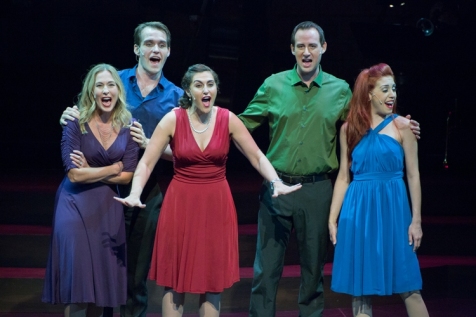 Chicago. Cabaret. Kiss of the Spider Woman. The Rink. New York, New York. Woman of the Year.  All are legendary shows with songs composed by a legendary team, John Kander and Fred Ebb.

After the success of the revival of Chicago on Broadway, songs from Kander and Ebb shows were fashioned into the musical revue The World Goes ‘Round, which premiered on Broadway in 1991.  It was later revised to include songs from lesser-known shows, and now, South Florida audiences can see MNM Productions’ wildly creative version of that revision, now at the Rinker Playhouse at the Kravis Center in West Palm Beach.

The World Goes ‘Round and other revues of its ilk are popular in regional theatre because they’re relatively easy to produce: Five performers, a couple of musicians—bam, there’s a show.  But that’s not now MNM does a revue.  The World Goes ‘Round is magnificently staged, turning a collection of songs into a marvelous, fully-realized show. 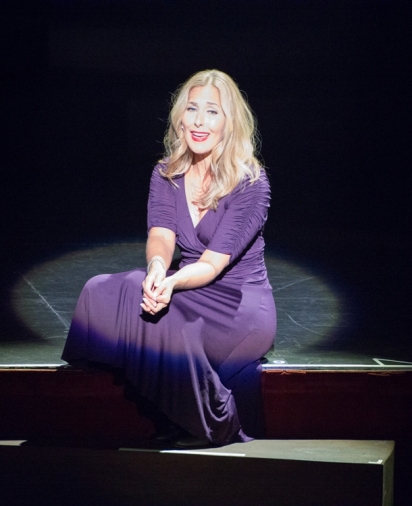 The World Goes ‘Round not only showcases a quintet of talented performers, but also showcases its visionary director, Bruce Linser.  What could have been an evening of fine singers performing classic Broadway show tunes with a little choreography thrown in has become a wildly inventive piece of theatre.  Linser has mined each song for humor and poignancy and emotion, created the thread of a love triangle that runs throughout the show and combined songs from different shows in a way that would make Kander and Ebb wonder why they didn’t put them together to begin with.

His staging of each song in The World Goes ‘Round is intricately sculpted into its own vignette, that both stands on its own and also fits within the larger piece.  Ring Them Bells from Liza with a Z becomes a fully acted sketch, while Me and My Baby from Chicago becomes a funny take on our love of modern love of technology. Even the hot-button numbers that you think you know are given a fresh look.  Cabaret, usually a solo star turn, is given a more nuanced Pentatonix-style arrangement that emphasizes harmonies.  And New York, New York is performed as a fun tip of the hat to the Big Apple’s multicultural population.

In perhaps the most inventive and hilarious piece, Shelley Keelor and Jinon Deeb play a couple of clueless theatre patrons who wander in while the rest of the cast is performing a scene from Chicago, and then, while singing Class, proceed to commit every offense a rude audience member can. It’s a wonderful re-imagining of the song, as well as a lesson to the audience.  (It didn’t have an effect on everyone though, as some patrons still left the show while the cast was taking their bows.  Hey Traffic-Beaters:  You were rude and you missed a terrific encore.)

Harmonies are tight and fluid.  The ensemble numbers such as Money from Chicago and Coffee in a Cardboard Cup from 70, Girls 70 are great fun—the cast even performs on roller skates for the title song from The Rink—but each member of the cast also gets a show-stopping moment.  Leah Sessa gets two biggies, doing a fan-Fosse-tastic job with All That Jazz from Chicago, and then later delivering a powerful solo on the torchy Maybe This Time from Cabaret, that prompted several people to give her a standing ovation.  Clay Cartland shows off his thrilling voice on Kiss of the Spider Woman and silently displays his athleticism while Sessa sings the bawdy Arthur in the Afternoon from The Act.  Keelor is lovely and poignant on Colored Lights from The Rink, which also features a young skater, Olivia Rose Chiampou. Michael Scott Ross brought more than one tear to audience members’ eyes with Sometimes a Day Goes By from Woman of the Year, and Deeb, who opens the show with the titular song, also shines on Ring Them Bells and in her other duet with Keelor, The Grass is Always Greener from Woman of the Year. 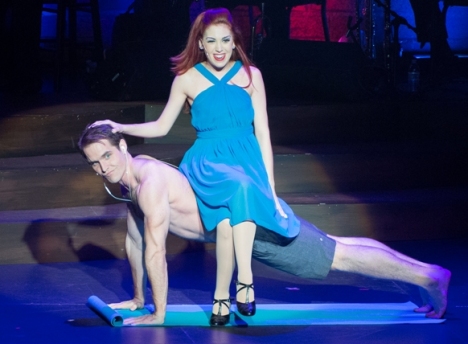 Even musical director Paul Reekie, who helms a killer five-piece band, gets into the act, singing Mr. Cellophane from Chicago, while the rest of the cast illustrate what it’s like for a singer to perform in a bar with rowdy patrons.

To bridge the gap between the intimate club set and the cavernous Rinker Theatre, the singers sometimes move through the audience. Kimberly Dawn Smith’s choreography is nimble and sexy and fun.  Jayson Thomasheski’s lighting design is beautifully evocative, while Kenny Reiss’s sound is flawless. Linda Shorrock’s costumes are sexy and imaginative.

The World Goes ‘Round runs through August 21 at the Rinker Playhouse at Kravis Center in West Palm Beach.  For tickets and information, visit Kravis.org.

All photos by George Wentzler