What would you give to have anything your heart desires?  That’s the question posed by Andie Arthur in her new play, Juliet Among the Changelings, which has its world premiere tonight at the Main Street Playhouse in Miami Lakes.  A young adult lesbian romance, the play is produced by the theatre company Arthur co-founded three years ago, Lost Girls Theatre.  In addition to being a playwright, Arthur has been the executive director of the South Florida Theatre League for nearly a decade.  Here, she talks about her inspiration for her play, what it’s like to go from playwright to producer, and why it’s important to see women’s stories on stage.

Where did the idea for Juliet Among the Changelings come from?

I’ve actually been writing a version of this play for about ten years now. I was in a playwriting workshop led by Carlos Murillo, who gave us an exercise where he laid out plot points from various plays and we would pick up one that we didn’t recognize and write a scene from it. And the plot point I picked up was, “A woman gives up her baby for magical powers.” I knew from the moment I read the prompt that I wanted to write a play from the perspective of the baby.  It took a long time before that became the current structure of Juliet Among the Changelings. This play is very much inspired by addiction to reading young adult fantasy novels — which I tend to love because (aside from Twilight) they pretty consistently feature complicated young women with agency. For our theatre company, which has a target audience of young adults, I wanted to write a young adult novel as a play. I simply subverted it by making the love story between two young women and played around with a lot of the tropes of the genre.  It’s also based on Celtic Fairy Lore, which is another long standing place of geekery for me.

Would you say there are themes running through your work? 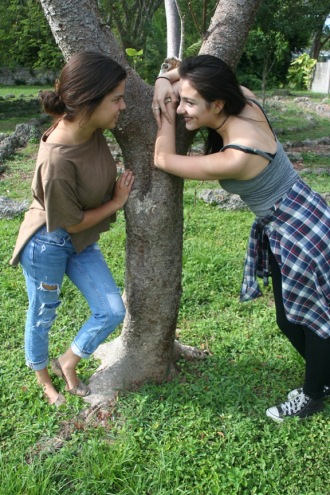 I’m interested in the stories of women, all different kinds of women and all different kinds of experiences of femininity. Genre-wise,  my plays range all over the map. When I get the question what sort of plays do you write, I kinda want to say all of them. My plays have ranged from historical dramas to romantic comedies about the apocalypse, but all of them have centered around a female protagonist.

What have been the biggest challenges producing your first world premiere with your own theatre company?

There’s always a thing when you know something is going be challenging and then actually facing the reality of how challenging it is. As executive director of the South Florida Theatre League, I’ve heard and helped a lot around issues of lack of advance ticket sales and fundraising, but it’s entirely different perspective when you’re in the trenches. I think I will become a much better ED of the League for this experience.

Rather than waiting for a theatre to produce your work, you made it happen on your own.  How daunting is that?

It’s not easy, but I highly recommend it. There’s something so freeing about saying, “Let’s do the work we want to see in the world” instead of complaining that the world doesn’t conform to my standards. This is our first time out and we have learned a lot — and we’ll definitely do things differently in the future — but it’s so nice to be able to make something happen.

What do you want the audience to get from your show?

I hope they enjoy it. The best thing that I could imagine is a young lesbian being able to see herself in this narrative. Of course, she wouldn’t be dealing with the magical part, but she would get to see someone like her on stage. There’s that great Junot Diaz quote about how if you don’t see yourself reflected in culture, you become a vampire. It’s so true. It’s so rare to see a young woman be the lead in a story for the theatre — most of the time they’re love interests or daughters or there for sex appeal, and it’s even rarer for lesbians to see themselves onstage. I hope that we can reach them and that they come out to see themselves on stage.

Juliet Among the Changelings  by Lost Girls Theatre runs through  August 21 at Main Street Playhouse in Miami Lakes.  For tickets and more information, visit LostGirlsTheatre.com